We are so pleased to report that both of our re-homed horses are happy and thriving in their new homes! We asked Ace and Bets’ owners to give us an update on themselves and their horses. Erin’s journey with Ace began long before his official adoption, so we asked her to reflect on her memories with him from the very beginning.

“Ace in the Hole” & Erin’s Journey 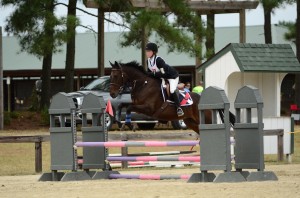 I wouldn’t consider it love at first sight, although now I couldn’t imagine my life without him.  My first memory of Ace was reading about him and the great leaps and bounds that he and the Hidden K Stables Rescue and Rehab program were taking. The flyers read “Welcome our first rescue, Ace in the Hole. Rising 16.1hh four-year-old American Warmblood. Hunter or eventing prospect.” I can’t particularly say I envisioned owning him some day. Ace was just beginning to develop muscle, gain weight, and under the very first stages of training.  He was scrawny and quite uncoordinated at first. At the time, I was looking forward to move up ratings in the United States Pony Club towards my C-1. I was interested in a bold jumper with complete training under saddle who could carry me through my C-3 rating, which was a goal constructed by distant hopes and dreams.

It was the summer of 2012 was when my search began. I was volunteering at a Hidden K Stables summer camp for young and beginner riders. Ace was in a lunge lesson, likely to test the waters with younger students and verify that he was calm, relaxed, and willing. I hadn’t seen him ridden much before and was speaking to Michelle Hargreaves, member of the rescue board and my trainer for upwards of 6 years. She was pointing out positive aspects of Ace’s conformation, noting his athleticism and movement. I figured she was just looking for someone to help give him even more love than he already received (which probably was an impossible feat), not knowing that her plan was to match us together.  I liked him but was worried he wouldn’t be the best fit for me and my desire to compete at height. However, a couple weeks later Ms. Michelle suggested I ride Ace in a lesson. Hoping to improve my flexibility and ability to ride a wide range of horses, I was happy to. For the next couple of weeks, I continued to ride Ace in lessons, but no more than once a week. Although he had been under amazing training and had been to the barn’s advanced camp with one of the rescue’s trainers, Kellie Younger, the previous summer, he was still not the most confident jumper.

In just a few short months, though, we had become confident over cross rails, verticals, and by the beginning of winter, Ace and I found ourselves in the middle of my C-1 rating. Specifications of this test included a course of 2’9” jumps in an arena and on a cross country course.  Prior to this rating, we had worked tirelessly, six days a week, to develop trust and conditioning after signing a full-lease on Ace. After we passed the rating, I looked forward to the spring. USPC hosted a show jumping rally, and we signed up for a lower level in hopes to build his confidence and perform our best. In short, Ace kicked butt. I was thrilled with his performance and couldn’t wait to spend every day over the summer to progress even further.

By advanced camp in the summer of 2013, Ace had competed as a horse in the Wake Forest University dressage shows at Hidden K, along with countless schooling shows, and we were spending a lot of time on dressage and overall improvement of his jumping. We trailered to the Fork Farm equestrian center in Norwood, NC, to spend a week riding twice a day. Through the heat, sweat, and massive improvements for Ace and me, my trainer and I realized Ace was happier on a cross country course than we had ever seen him. I cannot put into words how fantastic the camp experience was for us because it truly set the tone for how much I could expect from Ace in the future. We had gotten to the point in our riding where I was no longer simply teaching him, but he was also teaching me.

As the fall of 2013 approached, we competed at the Intro level at the USPC Carolina Region rally. Although Ace was capable of much greater height, I decided it was best for him to get more showing experience under his belt before pushing ourselves at a large show. Luckily, after the three day competition, our team received second place and Ace and I qualified for USPC 2014 Championships.  Following qualifying, in the fall of 2013 we passed all tested aspects of our C-2 and planned to complete the final portion in the near future.

In the meantime, my parents were focused on a different idea – finalizing the purchase of Ace in the Hole. Without my knowledge, my parents had purchased Ace in December. One day in the second week of January, I had just gotten home from the barn, and they told me the great news – I couldn’t have been happier!  Ace and I had accomplished so much in the past year and a half and I had finally gotten a horse of my own. Furthermore, Ace and I are looking to the future. Jumping upwards of 3’ courses, we are already signing of for spring eventing trials to cater to Ace’s adoration of cross country. We are preparing for Championships in July and have even greater goals for the next year, including working on our C-3 rating and participating in numerous clinics and eventing trials across the Carolina region.

I always say I cannot believe how lucky I am to develop into a better rider through my training with Ace, and his training of me.  Our journey has proven that hard work and persistence truly pays off. Although I never saw myself in my riding career where I am today, I couldn’t have done it without Ace and I wouldn’t want it any other way.

“All Bets are Off” Update 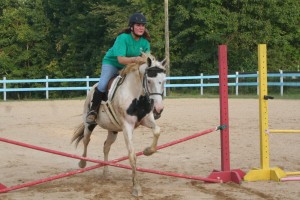 Ms. Bets has been a joy to have. She is mostly my personal horse but she does give the “advanced” riders a few lessons. She participated in summer camp with a home schooled group and she was also the recipient of a lot of Boy Scout attention while the St. Pius X School here in Greensboro worked on their badges. Ms. Bets continues to “speak her mind” so I am becoming a much better listener! She was a doll for her annual checkup and shots and continues to boss her best buddy, Iron around in the paddock. She has been in a few farm shows and we hope to get her ready to travel to some this year.

View all posts by: Mary Shafer