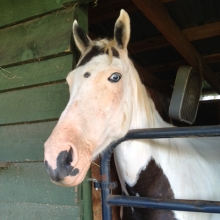 At first site, the unusual markings on this mare’s face and body certainly give pause. Odd looking, indeed, but gaze a little deeper into her heritage and you’ll discover Native American legends of magic and majesty that surround her uncommon appearance.

The dark marking on the top of her head, or poll area, is called a Medicine Hat marking. It is a splash of color, surrounded completely by white, that sits on the horse’s head like a hat. Native Americans believed horses bearing this particular marking were sacred and had magical powers that would protect any tribe who possessed it. Only the noblest of tribesmen, such as Shamans, Chiefs and great warriors were permitted to be carried by such a magical beast.

On her chest is another dark marking that is called a shield marking. It was believed such a marking would protect the horse and rider in battle. Again, only warriors of the highest regard were permitted to ride a shielded horse into battle.

With an up-close look of “Bets”, you will surely notice that both of her eyes are blue, which is also considered a rare and sacred trait among many tribes. Though specific meanings vary greatly by region, blue-eyed horses were often thought to be spirit horses reincarnated from legendary horses of their ancestors.

Certainly, as special markings go, this unassuming mare has hit the trifecta. But is it all fact or myth? While there is a lot of truth to Native Americans regarding certain animals as sacred, American history has muddied the waters on specific beliefs. Was the book written by Marguerite Henry titled “San Domingo: The Medicine Hat Stallion” a catalyst in the rebirth of a great legend or the making of a fairytale as whimsical as unicorns? Was the story invented by some old cowboy who was desperate to sell what was otherwise nothing but an odd-looking horse?

Either way, this mare wasn’t regarded as anything special by her previous owners and has now entered into Hidden K Stables Rescue & Rehab’s rehabilitation program where she will be given the care and training she needs to be a happy, healthy horse. Magical or not… myth or legend… this very special girl should expect the royal treatment while on her journey at HKSR&R.

View all posts by: Betsy

No Comments to “Study Stall: Myth or Legend?”